The Rusted Rails ignite local audiences with a captivating mix of familiar and original rock-a-billy, swing, and blues. They were voted best band by the Triangle Blues Society in 2011 and the Cape Fear Blues Society in 2010. These achievements earned The Rusted Rails coveted venues in Memphis, Tennessee, to compete in the prestigious International Blues Competition. The band, which hails from Willow Spring, NC, has an unmistakable, electrifying chemistry, with the individual members having earned the respect of musical peers and audiences alike.

Founding member and primary songwriter, Eric “E-Train” Manning (guitar, vocals) has been writing and performing for 25 years, sharing the stage with Bob Margolin and opening for legends Crosby, Stills & Nash, Chicago and Linda Ronstadt. His songs really resonate with audiences, as he shares his humorous commentary on life. An award-winning graphic artist, E-Train designs the band’s eye-catching and very collectable promotional material, customized for each venue. Dave “9-Fingers” Cramer (drums, vocals) has played most styles of music both live and in recording sessions. He has shared the stage with James Cotton and Bob Margolin and opened for The Band and Jimmy Cliff. Dave “Dog House” Sampler (upright bass, vocals) got his start playing bluegrass and has opened for Brad Paisley and Ricky Skaggs. Jordan Koronet (Electric Bass and vocals) has worked and recorded with 38 Special and The Shangrilas.

So c’mon out and catch the ‘Rails, as they pay tribute to the many musicians who have influenced their one-of-a-kind style. You can catch them at local venues throughout North Carolina, as well as at regional events such as the Wilmington Blue Festival and the Bull Durham Blues Festival, where they were the featured band for 2012 . If you can’t catch ‘em live or simply can’t get enough, check out their site on Reverbnation for a taste of their latest studio and “live”songs and to view schedule updates. Their latest CD, The Rusted Rails Volume III, is available at performances, as are the collectible pin-up posters and bumper stickers. If you haven’t experienced the Rusted Rails before, it’s time to climb aboard and enjoy the ride! 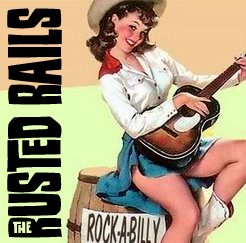