Marty Moody created The Vault Band in 2002. We play Classic Rock from Creedance to AC/DC and all points in between, including “Todays” Rock. We pride ourselves in playing and active participation with the audience. We want the audience to enjoy the music as well as participate at times.

Marty, along with best friend Eddie Newsome, began a two piece band back in the late 90’s called Kid Cuz. They decided to become a power Rock Trio in July 2002 and added Moody’s fiancée Lucie (Rocker) on Bass. At this time they changed the name to The Vault Band and have been ROCKIN ever since. Kirwin Darney (drums) joined The Vault Band in June 2007, giving Eddie a break to explore other areas. Kirwin recently celebrated his 5th year with The Vault Band and to this day, Eddie has a large presence in the band, and occasionally sits in on the drums 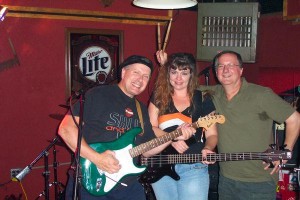